Q&A about Syphilis & Gonorrhea with doctor 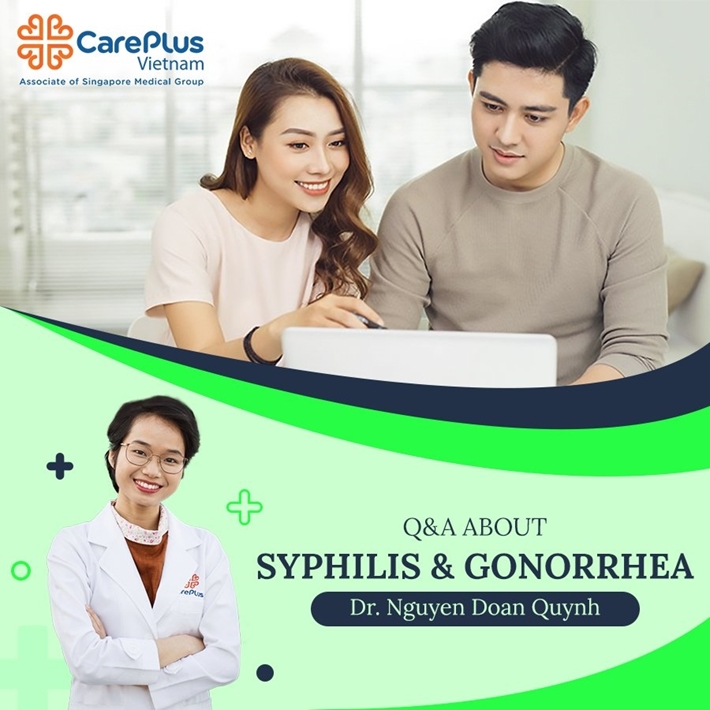 1. Chlamydia, Gonorrhea can cause infertility in women?

2. Symptoms of syphilis every stage

Symptoms appear about 2-3 weeks after infection conclude painless, slightly raised, clean bottom sores in the genital area (penis, vagina, cervix, mouth/throat, anus). Along with the ulcer is the swelling of the adjacent lymph nodes. The chancre will last for about 3-6 weeks and then heal on its own, even without treatment.

Without treatment, after the chancre heals, bacteria will enter the bloodstream and may develop the following symptoms after 3-6 weeks:

In stage 2, symptoms usually last 3-12 weeks and may resolve on their own. If left untreated, the syphilis bacteria might damage other organs. About 25% untreated patients have such symptoms repeatedly within the first 2 years of illness.

Stage 3: May last long several years since the onset of symptoms of syphilis. Manifestations are complications on the nervous system, heart, bones, etc.

3. Do pregnant women with syphilis transmit disease to babies?

Pregnant women with syphilis can pass it on to their babies. Symptoms include repeated miscarriages, premature birth, normal baby but have symptoms later. All cases with or without symptoms, if not treated, may lead to complications from mild to severe, such as eye damage, ear damage, bone, tooth, nervous system damage, or even early death.

Obstetricians often screen for STDs infecting from mom to the fetus such as Herpes, Gonorrhea, Syphilis, Hepatitis B, HPV. Mom should take regular check-ups if have suspected behaviours like having many sexual partners or her partner has STDs before. Hence, obstetricians can consult proper ways to reduce the risk of infection.

4. How to treat newborns who have syphilis

Pregnant women with syphilis can pass it on to their babies. Symptoms include repeated miscarriages, premature birth, normal baby but have symptoms later. All cases with or without symptoms, if not treated, may lead to complications from mild to severe, such as eye damage, ear damage, bone, tooth, nervous system damage, or even early death.

Congenital syphilis must treat immediately after birth or soon after diagnosis by penicillin. The dosage may vary depending on the doctor’s advice. Children with syphilis need to be monitored and evaluated after many months of treatment.

5. How not to be re-infected with Gonorrhea and syphilis?

In order not to be re-infected with Gonorrhea, you need to take safe sex measures such as:

6. What are neurosyphilis and visual syphilis?

Without treatment, syphilis can progress silently to stage 3 about 10-20 years after infection. At this stage, syphilis attacks the heart, blood vessels, brain, and nervous system and can lead to death.

Syphilis complications in nervous system and eyes are known as Neurosyphilis and Optical Syphilis.

Symptoms of neurosyphilis include:

Symptoms of visual syphilis include vision changes and blindness.

7. If I have syphilis, does that mean my partner is infected too?

8. Complications of syphilis in other organs

At stage 3, syphilis symptoms include 3 main groups: Neurosyphilis, Cardiovascular syphilis and Gum syphilis which are the most dangerous complications.

Neurosyphilis: Syphilis can attack the spinal cord and/or brain. One of the most common clinical forms of neurosyphilis is Tabes disease, which occurs when syphilis attacks the spinal cord and nerve roots. The disease often presents with severe pain in the area near the injury. More severe can lead to dysregulation of muscle movement, loss of sphincter control.

Cardiovascular syphilis: Syphilis usually affects proximal portions of large arteries such as the aorta, damaging the aorta, which can lead to heart failure. Sometimes it also damages other blood vessels, causing damage to the respective target organs.

Syphilis gum: These are destructive, nodular lesions that can appear in any organ but are most commonly found in the skin and bones.

9. How to treat gonorrhea - syphilis?

Gonorrhea can cause purulent, painful urination in men. In women, the symptoms of gonorrhea are very vague and may include painful urination, pain during intercourse, and discharge with an unusual odor or color. Syphilis has symptoms as described above.

If a person has suspicious symptoms of Gonorrhea and Syphilis or a sexual partner has been diagnosed with gonorrhea or syphilis, it is important to seek medical attention for early diagnosis and treatment. If a person engages in risky behavior (unsafe sex, multiple sex partners, same-sex relationship), gonorrhea and syphilis should be screened every 6 months to 1 year for early detection and treatment. Gonorrhea and Syphilis are treated with oral or injectable antibiotics appropriate to the causative agent.

For early and periodic screening of STDs for timely diagnosis and treatment, Register:

Screening for Sexually Transmitted Diseases (STDs)
For couples, sex is a factor that nurtures their love. In order to be safe and healthy, screening for common sexually transmitted diseases is essential.

Q&A about STDs and HPV virus

Do you need to make Covid-19 test if taking domestic flight from Ho Chi Minh city?

Do you use dental floss rightly?
Let's watch with CarePlus right away the video on how to use dental floss by Dr. Phan Huu Quang (Over 5 years of experience, Doctor of Dental Cavity (RHM) Central RHM Hospital, Ho Chi Minh City) now!

How many calories are in food on Tet Holiday?
Tet is a series of delicious eating days with many delicious dishes that only come once a year, such as chung cake, spring rolls, spring rolls… Happy Tet, but don't forget to control your weight by finding out the calories in daily foods. Happy New Year & increase vitamin and fiber supplements, eat slowly, chew well, practice the habit of defecating once a day and don't forget to maintain daily exercise to 'healthy liver - healthy pancreas - happy intestines - repelling' diseases.