Diseases that are more common in women than in men

Women have a higher risk of certain diseases than men. Many health problems are common in both men and women. However, some conditions may be more common in women or affect women differently than men, like common illnesses. 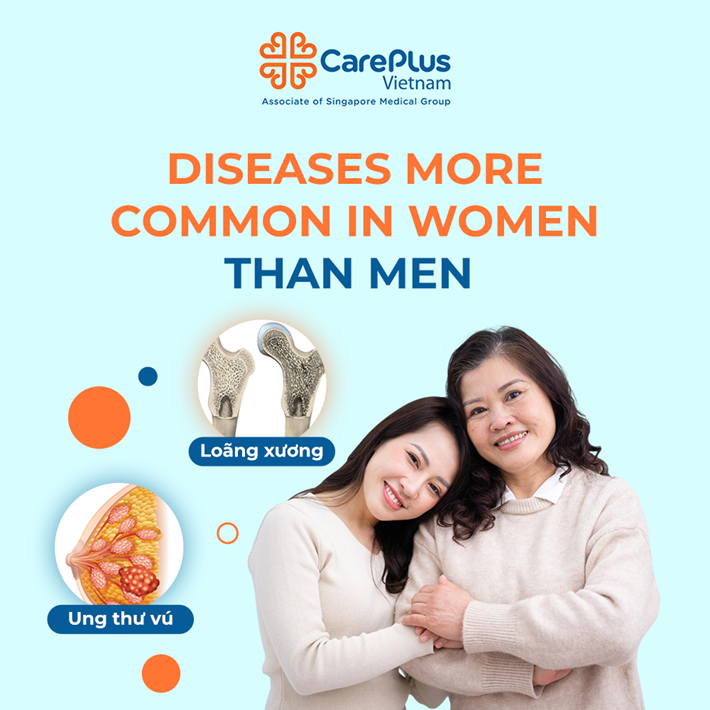 Women are 10 times more likely to develop breast cancer than men. Research has shown that the reason women are more susceptible to breast cancer is that they have more breast cells and a faster growth rate of breast cells than men. As a result, cancer cells in women tend to multiply at a higher rate than in men.

You may be mistaken in thinking that only women get osteoporosis. This is not entirely accurate, but women tend to suffer more and suffer from this disease than men. While one in four men is at risk of developing this condition, the rate in women is one in two.

As life becomes increasingly stressful plays a role in triggering heart attack symptoms in women. On the other hand, the warning signs for myocardial ischemia in women are very vague. Rarely is the typical picture of angina. On the contrary, there are often symptoms that are easy to deceive even the doctor such as dizziness, fatigue, headache, sleep disturbance, difficulty breathing, indigestion, back, shoulder or throat pain, jaw pain or pain that radiates to the jaw. , pain from the center of the chest spreading to the arm... Therefore, women rarely go to the Cardiology department but go "around" causing mild disease to become severe.

Especially for women over the age of 50, not only face age, but women also have a higher risk of heart disease. Because when entering perimenopause and menopause, the level of estrogen - the hormone that helps protect heart health decreases. Cardiovascular disease is therefore uninvited.

In the US, women have 55,000 more strokes each year than men. Women also die from the disease more often than men, according to the American Heart Association and Stroke Association.

Aging of body parts
As we age, our body deteriorates physically, affecting our ability to balance, the body becomes slow and out of control, easy to fall. Gradually unable to do daily tasks, causing many diseases and high mortality

4 Stages of cirrhosis and sign to know
Cirrhosis is the result of many causes that damage cells… liver tissue. When the amount of damaged cells such as liver tissue exceeds the regenerative capacity of the liver, these sites are replaced by scar tissue, the process of liver cell damage and fibrosis occurs continuously for many years, days. The more severe it will lead to total cirrhosis

What age is ideal for porcelain crowns?
Porcelain veneers have many advantages, but not all ages are suitable for this method. Before crowning, you need to pay attention to the specific age of porcelain teeth as follows:

Anyone of we need to diagnose cancer
Digestive tract diseases are a common problem in the community, especially in today's modern life. The disease often progresses silently but causes many dangerous complications, more serious can lead to cancer or death.